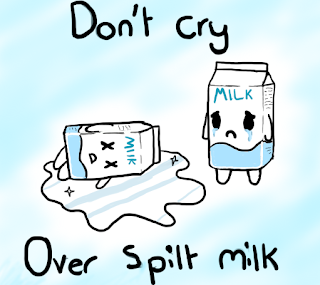 Although there's only three years between our two sons, apparently the world of bottle preparation has evolved with new advice/guidelines. As any parent knows when it comes to feed time, particularly involving bottles there's the potential for hell to be unleashed. The time I'm sure we all dread most is the middle of the night feed. We're fuzzy headed with limited sleep, trying not to wake the other children or if you care enough, the neighbours. So any short cuts that keep the screaming down the better.

With our first son, once we decided to bottle feed we followed everything to the letter, but it was clear everyone was getting stressed out. In our bottle feeding journey it took four stages before we found what worked best for us:

Stage one - You may think I've left the house, it's taking that long:
I call it this, because that's what it felt like. We'd set our alarm before the two hour mark. That's right we would wake the sleeping beast every two hours (from when the last feed started), as this is what the Health Visitor told us to do. I'd trudge downstairs, blind myself with the kitchen light and boil the kettle, and then wait whilst it cooled in a jug. This took about 20 mins at best. But if our son woke up during this time I think everyone within a 2 mile radius knew about it. Or certainly the old couple down the road would let us know about it.

Stage two - Chill out:
I'd still trudge down the stairs, but had read somewhere it was possible to store cooled boiled water in the fridge. So that's what we did. We would then spend 10 minutes warming it back up. So revers of phase one, taking half the time, and if I'm honest not much better with keeping the shrill cries to a minimum from upstairs.

Stage three - Lock and load:
It suddenly dawned on us that when we were out and about we'd use cooled boiled water that was good for a few hours. So it was logical that would work at night as well. So we tried it. Powder already measured out, straight into the bottle all before my son's would start making those squeaky noises. Plus we found he was drinking more of it because it was not all 'nice and warm', which meant he slept longer. He was happy, we were happy, and the old couple down the road, well, are never bloody happy.

So, with the impending arrival of son number two, three years later I thought we'd be doing 'Phase three - Lock and load'. How wrong was I. Apparently in that short time, the advice had changed. So my wife not wanting to go back two phases purchased the Tommee Tippee Back to Nature Perfect Prep machine. I was skeptical to say the least. After all it has a filter that could run out any time, it's yet another machine on the kitchen worktop along with the steriliser, it beeps, and above all, phase three worked fine as our first son survived it.

Stage four - Push of a button:
That said four months on I have changed my mind, because although making the bottle takes around two minutes the whole bottle preparation process is a lot quicker. We're not having to boil the kettle and cool them before using. We simply set the dial to the required amount, place the bottle on the stand and push the button. It puts a shot of hot water in the bottle, you have two minutes to put the formula in before you get a warning beep, give it a quick swill around and put back on the stand and press the button again. Job done. We still measure out the formula as per phase three, take up a couple of bottles with the machine and put it in the corner of the bedroom ready for when he starts stirring naturally. None of that poking the sleeping bear rubbish. The only thing is the filter, I drove round one lunch time trying to find a replacement as the warning light came on. Boots, Toys R Us nor Tesco stocked it. However, I found it on Amazon, with the added bonus of pre ordering automatically.

So, would I recommend it. You know what, I would. Whether it's for your first, second or fourth child. It's as close to instant as you're likely to get, hassle free with little up-keep required and importantly safe for your little one(s).