The wake up call to the work/family life balance 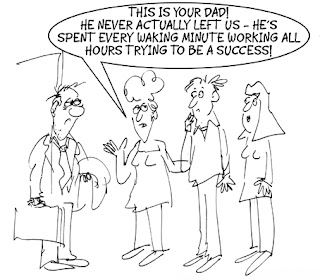 After a busy start to the year with work, we decided to get away for a long weekend at Centre Parcs. Lots of happy memories (and the FitBit went came into its own) as our first get-away as a family of four. Our lodge was booked until Monday morning 10am, but we wanted to keep our eldest in his routine of his new nursery in an attempt to overcome his anxious transition, so we left late Sunday evening to return home. Having booked the Monday off work to do tip runs, and financial stuff that does not usually get a look in, I thought I'd do the nursery run and pick-up as I've not had the opportunity to do so since he started in January. And I'm pleased to say our eldest was delighted with this change to the usual journey, and it gave my wife the chance to have a lay-in (with our youngest).

We set off walking, and talked about what he could tell his teachers and friends about his weekend, and that we'd print some pictures off to stick in his activity book for show-and-tell later in the evening. Before we knew it we were at the gates being welcomed in. He took me into the building showing me where everything was, pictures of his friends and dragged me over to his teacher. To which he then clammed up and hid behind me, eventually coming round when I started talking about his weekend. We had a massive hug, and off he went to find his name on the table. And a morning and afternoon of tedious jobs awaited me.

The pick-up came around all to quick, so I darted across to the nursery walking past parents in parked cars, which as a novice seemed a little odd. But it was not until I got to the playground where I clearly stuck out like a saw thumb as a new-be, as there were groups of parents huddled round, that I realised why the others were in their car's. Thankfully I didn't have to stand around for long, before I was greeted by my son grinning from ear-to-ear, sprinting across the playground. The walk home was just as fun as that of the morning. I must admit it's something I'm envious of that my wife gets to do, and be involved with. Even when getting home and within a space of 30mins all emotions come pouring out due to tiredness. It was nice to be apart of this little world that typically I'm excluded from due to the hours I work midweek.

The moment came just before bedtime when I was hit with how much my eldest enjoyed the change to his routine, but not in a good way on my part:
My eldest: "Daddy, can you take me and pick me up tomorrow, please"
Me: "I'd love to, but I have to work tomorrow, so mummy will take you and pick you up"
My eldest: "Why do you have to work?"
Me: "To buy things like food, clothes and weekends away"
My eldest: "You work too much, and you don't have to go to work tomorrow, because they don't have anymore money".

Whilst his reasoning was funny, this is the first time my eldest has made any comment about the hours I work. I always try to make sure that in the evenings I give him my full attention, even when I've got other things on my mind.  I often bring work home with me, which when things are not running smoothly as part of the bedtime routine, I'm guilty (and I have to admit that I hate this), that in the back of my mind I'm thinking about being delayed in starting. I thought I had masked this from my eldest, but with the conversation from today he's clearly picking up on things quicker than I had given him credit for. So, I may not be able to do anything about the hours I work mid-week, but I'm determined to make sure that I get the work-life balance in order, so my sons don't feel they're second behind work, and the weekend away certainly helped as a starting point.